Understanding the genetic basis of adaptation in foundation species will allow selection of pre-adapted seeds to establish resilient ecosystems that support the broad range of life supporting services.This project will apply genomics to solve real environmental challenges in Eucalyptus restoration and be a model for other foundation species.

Local adaptation is hypothesized to be critical for restoration but under disturbed and changing environments, narrow genetic diversity may limit success. We propose a Genome Wide Association Study to map adaptive loci in two Eucalyptus species with broad environmental envelopes in eastern and Western Australia, to identify causative loci and population structure associated with local climate adaptation. This will enable genomic selection of high quality families to improve management and restoration under future variable climates. The researchers, natural resource managers and industry partners assembled for this project believe that this approach to restoration is the future direction that must explored to build resilient and adaptable vegetation.

Adaptive genetic variation within species has been filtered by natural selection in local environments. Land use change and intensification as well as climate change have disturbed local environments requiring organisms to migrate, adapt or face regional extinction. This is especially true for foundation plant species that establish and stabilize habitats and provide essential ecosystem services from a stable ecosystem base. Landscape restoration is now actively used to manage ecosystems and rehabilitate degraded land. Sourcing of seeds to facilitate adaptation, especially for foundation species, is of critical importance to the establishment and long term success of restoration.

This proposal will analyze the genetic basis of climate adaptation in two Eucalyptus foundation species with large widespread distributions along the east and west coast of Australia. Eucalyptus melliodora (Yellow Box) tracks the dry area of the eastern great dividing range with latitude ranging from Victoria to the Queensland border spanning an east/ west moisture gradient.  Eucalyptus marginata (Jarrah) inhabits the southwest corner of Australia with 3 degrees latitude range and 600-1200mm/year rainfall gradient. Both species support a biodiverse understory flora and fauna that provide essential ecosystem services. These two species represent contrasting management scenarios, restoration after agriculture and rehabilitation after mining and forestry activities, but it is imperative that activities under each of these management scenarios facilitate adaptation to climate change. Reseeding from local remnant stands is challenging and considerations about climate change and inbreeding depression test our assumptions that ‘local is best’. Seedling establishment of foundation species is critical for restoration success and natural selection by the regional climate is likely to act on growth rate variation at this early stage. We will determine the genetic basis of variation in seedling growth rate under simulated climates and determine the geographic scale of local adaptation among source families and their provenances.  We will then test the ability of this genetic model to predict establishment success of pre selected seed lots in local field trials. If the model has even modest predictive power it will empirically guide seed sourcing for restoration with resilience to changing climates. A vital question is then, whether genetic adaptation for seedling establishment translates into robust woodland and forest in 25 years time. Fortunately, we are able to test this assumption in E. marginata now, using a provenance trial planted in 1988. By comparing the genetic basis of climate adaptation in seedlings across climate chambers and field conditions, to the genetic control of adult traits, we aim to be able to predict and improve the long term persistence of foundation species and ecosystems they support.

This project will develop methods to guide land managers and restoration practitioners on the sourcing of seed to maximise adaptive potential of planted populations to future climates. It will develop a genetically explicit model with the twin goals of optimizing allele frequencies at adaptive loci and maximizing background diversity. The genetic model allows the prediction of growth traits in different environments from genotypes, enabling the selection of high quality seed lots suitable for changing regional climates. In short, this project will determine where to collect, if and how to amplify, and where to plant, guiding managers for restoration success.

To deliver these management outcomes the project has three research aims:

Jarrah is an iconic species, a prized timber, and foundation for southwestern forests underlying Australia’s global biodiversity hotspot. Forest management in WA is carried out under the principles of ecologically sustainability that seeks to sustain ecosystem integrity, while continuing to provide ongoing social and economic benefits to the community through the sustainable access to wood and non-wood forest resources and enjoyment of other forest values (DEC 2004). Ecologically sustainable forest management by both government and industry requires rehabilitation of disturbed sites after harvesting and mining activities to preserve ecosystem function. Selection of seed to facilitate long term persistence in the face of changing climates is important for forest climate adaptation strategies. Decisions on whether to undertake assisted migration of climate adapted genotypes requires a sound scientific basis through understanding of patterns of climate adaptation at the local and regional scale.

Our major goals for the E. marginata component of the project are to 1) characterize genetic variation across the range to identify alleles that are associated with regional climates and adaptive phenotypes, 2) to test direct seed and seedling transplant strategies for incorporating adaptive genetic information into rehabilitation programs, and 3) identify phenotypic signatures of climate adaptation in adult trees. Adaptive genetic variation will be identified using pure and inter provenance hybrid progeny from the trial, by phenotyping and genotyping seedlings grown in climate chambers that simulate locations across the geographic range. Adaptive loci identified among seedlings may show environmental sensitivities and/or associations with provenance specific climates, some of which are likely to overlap with loci identified as controlling adults traits. Finally, inter provenance seed lots will be directly seeded into operational scale rehabilitation and restoration trials. Seedlings that establish will be phenotyped and genotyped to validate that the alleles which were predicted to be adaptive are indeed present in successful recruits. With great foresight, a wide provenance trial was planted in 1988 and evaluated in 2003 (O’Brien et al, 2009). It is still growing and represents a unique resource for assessing the genetic basis of local adaptation in mature stands (FIG 1A).  At least 1 block in the trial (2500 plants from 245 families from 25 provenances) will be genotyped by sequencing to allow Genome Wide Association Studies (GWAS) with adult phenotypes and local climates (Hancock et al, 2011).  The major loci and background genomic variation controlling adult growth traits and/or associated with climate variables differing among provenances, that define an adaptive genetic architecture will be identified.

In southeastern Australia, agricultural expansion following European settlement has seen millions of hectares of eucalypt communities cleared or converted. Box-Gum Grassy Woodland (BGGW) is one such community that once covered millions of hectares in southeastern Australia but land clearance or conversion has seen it decline to  ~10% of its pre-European distribution. Yellow Box (Eucalyptus melliodora) is one of the dominant eucalypts in this community and is highly valued for its durable timber and honey production as well as for its tolerance to a range of soils, waterlogging, salinity and for providing shelter and shade for stock. The restoration of BGGW is a high priority for land management agencies, NGOs and land owners across south-eastern Australia. This project will value-add to existing and ongoing Yellow Box research that is seeking to understand the population genetic structure across the species range to improve seed sourcing practices.  Seed is currently available for 30 provenances with an additional 30 locations currently targeted for collection. They span the eastern range (Fig 1B) and include dozens of maternal lines per provenance.  Some sites are intact expansive stands and others are small isolated populations in a highly disturbed and fragmented habitat. Population size variation provides an additional contrast to the broad climate zones covered in the provenancing. 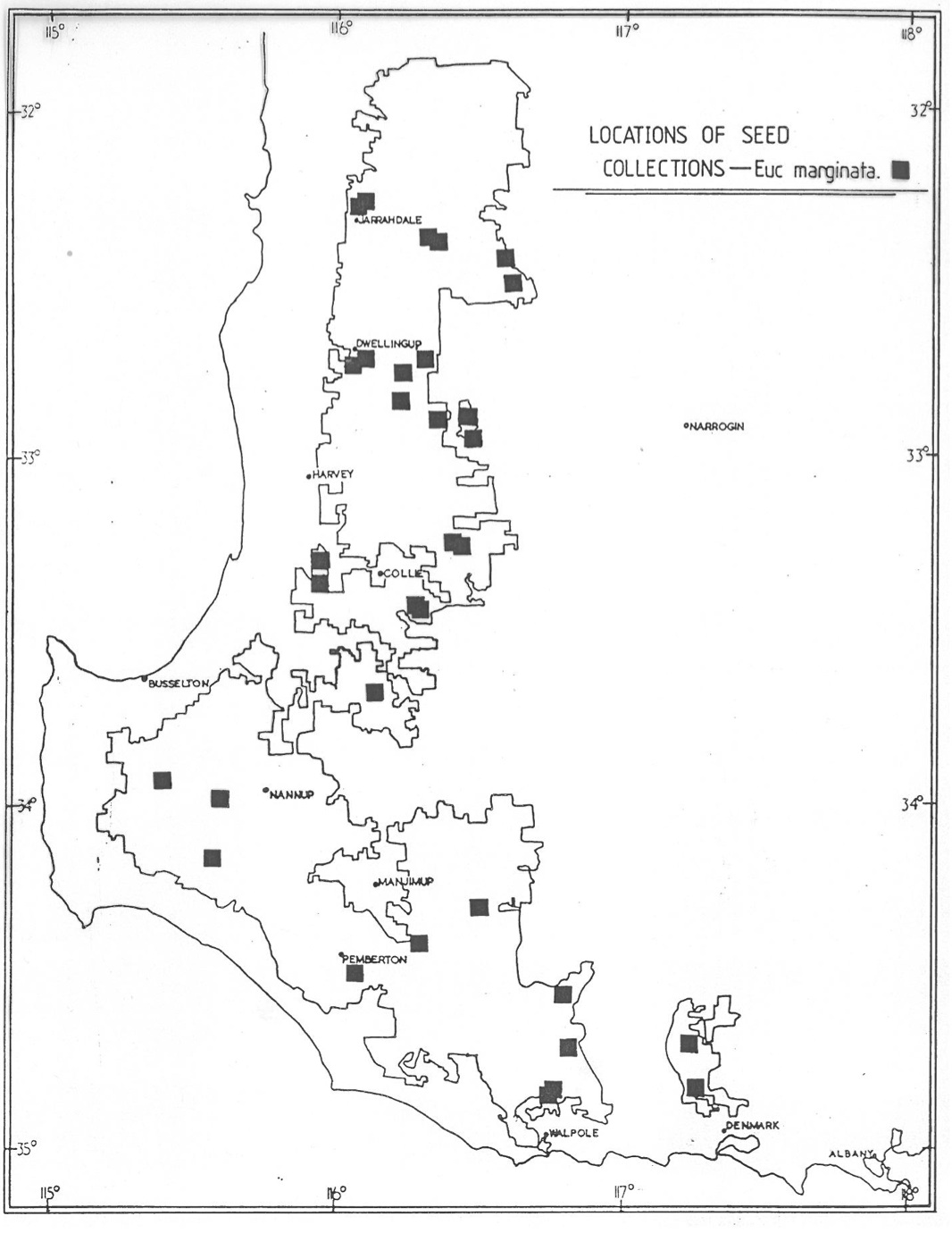 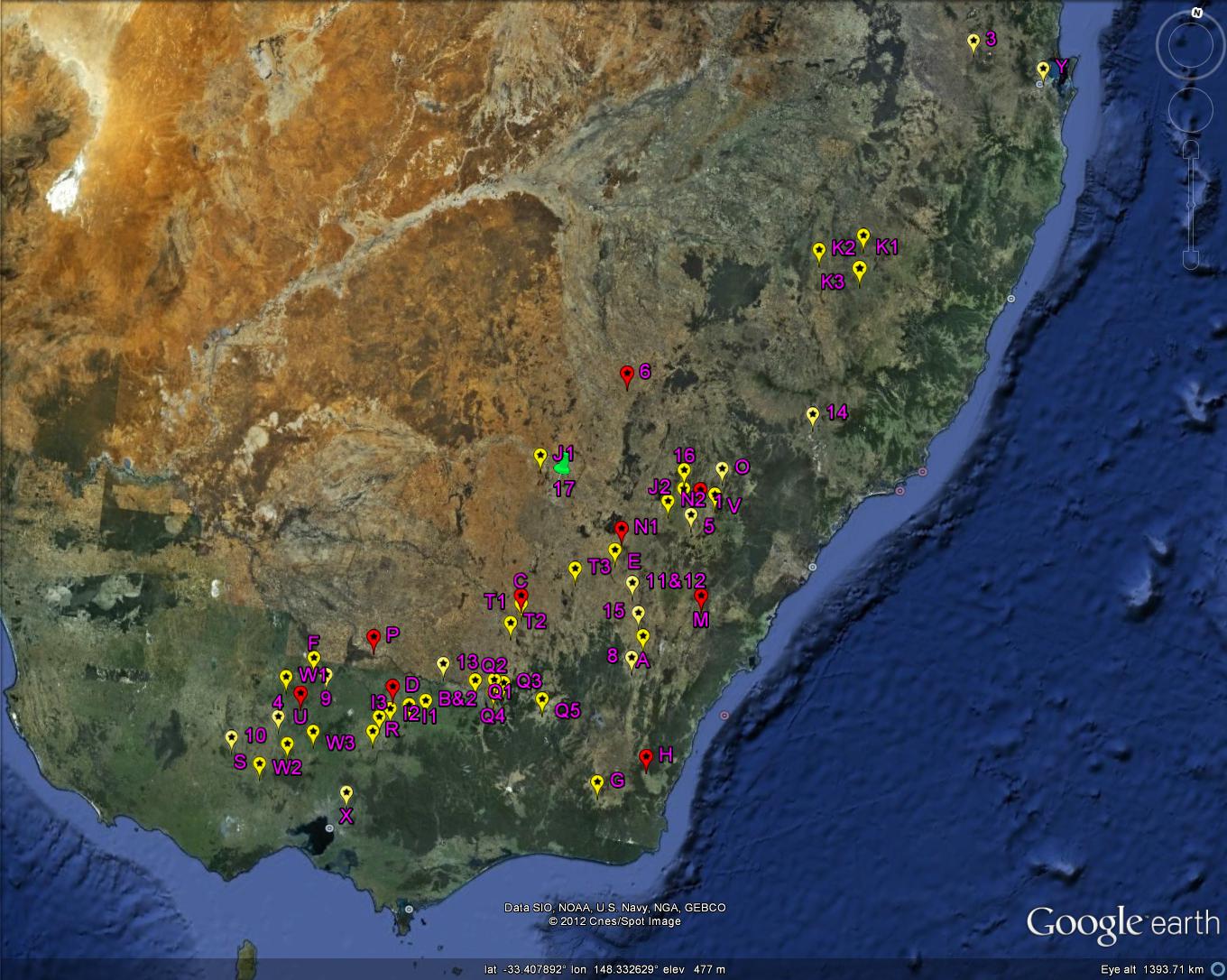 Figure 1. A) E. marginata provenances that were sources of seed planted in a trial in 1988, B) Seed from E. melliodora provenances, include progeny arrays from up to ten mothers, has been collected with a GPS location and a voucher specimen as part of a larger CSIRO-funded research project.

GWAS with Genometyping by Sequencing

This project will generate deep genome sequence coverage (>1000X) for E. marginata and E. melliodora which are in the Monocalyptus and Symphyomyrtus subgenera respectively (~500Mb genome, ~500Gb single hiseq flow cell ~$25k). Other sequenced Eucalyptus genomes of E. grandis, and E. globulus, are in the Symphyomyrtus subgenus and can provide reference guided assembly using SHOREMAP (Schneeberger, 2009).  Previous linkage mapping has determined colinearity and synteny of markers between a number of eucalypt species including E. marginata and E. globulus (Byrne 2008). Thousands of individuals within and between families and provenances will be multiplexed to provide collective coverage and haplotype phase. Within families, where linkage disequilibrium is extensive, the technique allows simple imputation of missing genotypes (Huang et al, 2012) resulting in a near saturating haplotype map of common genetic variation. GWAS will be used to identify QTLs and the effect of population structure for overall growth rate across environments. The genotype by environment interactions for N/S and E/W climate contrasts will yield a 2D model of what genotypes are predicted to grow the best across the climate range (Li et al, 2010). 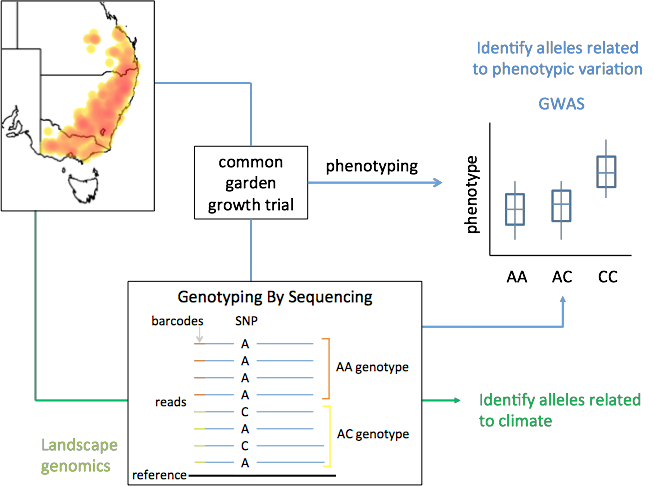 Figure 2. Genome Wide Association Studies utilize individuals from widely distributed provenances. They are phenotyped in a common garden and genotyped across the genome, and then statistical tests are performed to identify alleles are associated with phenotypic variation. Landscape genomics describes an approach where widely distributed individuals are sampled and genotyped at many loci, and analyses are performed to identify loci that are related to features of the environment (after accounting for genetic variation due to demography, or other neutral processes). In each case, genotypes will be determined for many loci in each individual using Genotyping by Sequencing (GBS). GBS is performed by shearing DNA from many individuals into small pieces, attaching unique barcodes to the DNA of different individuals, pooling and performing next-generation sequencing. Sequencing reads can then be assigned to different individuals and mapped to a reference sequence, before identifying SNP sites, and determining the genotypes of each individual.